Arteriovenous malformation is a plexus of abnormally widened arteries and veins with the absence of a capillary network. AVM is characterized by an acceleration of blood flow through the arteries and veins. AVM – congenital pathology. The most serious complication is hemorrhage (intracerebral haemorrhage) with a high risk of disability of patients, development of severe neurological deficit or death, regardless of the type of malformation.

Arteriovenous malformations occur in 0.14% – 2% of the population.

The average age of patients with diagnosed AVM is ≈ 33 years. 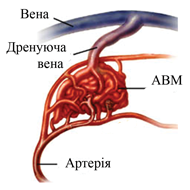 The goal of endovascular embolization – the maximum possible exclusion of AVM from the blood flow, is achieved by the introduction of an embolisate directly into the arteriovenous shunts in the cavernous part (naidus) of the malformation.
• Transarterial access is effective in the presence of direct AV shunts, with a small number of afferent arteries
• Combined arterial-venous access (S. Gudak) – the most radical, technically complex. Effective with all AVM.

Description of the method.
The goal of endovascular embolization – the maximum possible shutdown of AVM from the blood flow, is achieved as a result of obliteration of arteriovenous shunts in the cavernous part (naidus) of malformation. Liquid embolizing substances are used:

Examples of switching off arteriovenous malformations from the bloodstream 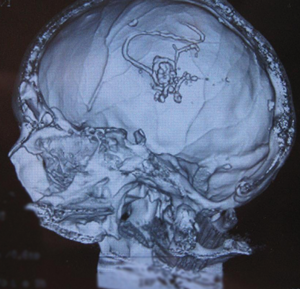 ARTERIOVENOUS MALFORMATIONS OF THE SPINAL CORD 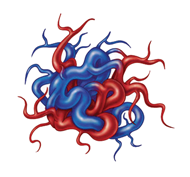 Arteriovenous fistula is an abnormal connection between the artery and the vein. Native pathology is often combined with the presence of several communication vessels. In this regard, the complete elimination of pathology is often impossible. Treatment can consist in embolizing the area of pathology by the method of stationary occlusion or in its surgical removal.

Examples of treatment of arteriovenous anastomoses:

Before exclusion from the circulation

After the operation, the AVM is turned off from the circulation